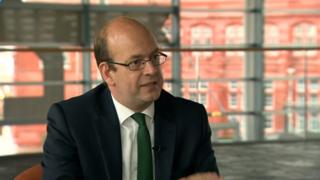 The leader of the recently-formed Brexit Party assembly group has accused the Senedd’s presiding officer of being biased against his AMs.

Mark Reckless accused Elin Jones of ’tilting the playing field’ – and said it is “wrong” that she is a member of a political party.

The two have clashed over the time given to his AMs to question ministers.

The assembly said Ms Jones, a Plaid AM, acts with impartiality at all times in line with the rules of the institution.

Nigel Farage announced the formation of the group of four AMs during the European Parliament election campaign last month.

AMs in Plaid Cymru, and some in Labour, complained that the group had no democratic mandate having not fought an election under a Brexit Party banner.

The presiding officer – or Llywydd – gave permission for it to go ahead, and an attempt to stop the group from forming went nowhere.

The assembly’s presiding officer is equivalent to the speaker of the House of Commons – overseeing the conduct of debates and the business of the Senedd chamber.

But unlike the Commons, presiding officers in the assembly have remained members of their political parties.

Opposition party groups are able to nominate AMs to be spokespeople, who have rights to ask ministers questions during assembly proceedings.

Last Wednesday, in a tense exchange in the Senedd, Mr Reckless attacked presiding officer Elin Jones for cutting the number of questions party spokespeople could ask.

Mr Reckless said his group was able to ask ministers a “quarter” of what other parties could.

“Presiding Officer, won’t people conclude that you are biased as part of the Remain establishment,” Mr Reckless told Ms Jones.

The presiding officer replied saying the Brexit Party had been given the same allocation as UKIP – a party group until May – had recently.

But she added: “I need to point out to you that I can only call your members if they make requests to ask questions, and, for the record, for members, I received no such requests from the Brexit Party today.”