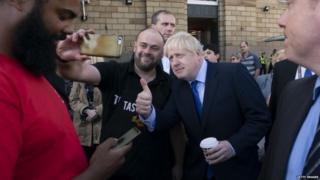 At the 2017 general election the two main parties, the Conservatives and Labour, received 84% of all votes across Britain.

That reversed a long-term trend which has seen the electorate become more fragmented.

However, recent polling suggests the 2017 result was an aberration. The big two parties have fallen back again since then with voters saying they will switch to other parties – particularly the Liberal Democrats and Brexit Party.

The Tories and Labour are also down in Scotland but there the picture is different because the SNP are dominant.

In polls published this month, they’ve been averaging at about 33%. That compares with about 25% in the month before he moved into Downing Street.

The bounce has been achieved almost entirely at the expense of the Brexit Party, whose support has almost halved since its high point at the time of the European Parliament elections in May.

The Green Party, which also peaked around the time of the Euro elections, have fallen back.

What could this mean for the expected forthcoming election?

Well, despite the bounce, the Conservatives are a long way down from the 43% they achieved in 2017. Their only comfort is that Labour are down even more.

On a uniform national swing, the current polls suggest a small overall shift from Labour to the Conservatives.