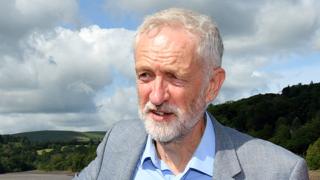 Labour leader Jeremy Corbyn has urged MPs from all parties to install him as prime minister, in order to stop a possible no-deal Brexit.

So, where does the party stand on Brexit?

He says he will call a vote of no confidence in the government. And if it succeeds, he hopes to head a temporary government that would try to extend Article 50 – delaying the Brexit date – to allow a general election to take place.

In that election, Labour would argue for a “public vote” – a referendum – on the terms of leaving the European Union, in which voting to remain in the EU would be an option.

Brexit or no Brexit?

In Mr Corbyn’s letter, he stops short of saying the party would campaign for Remain if it was in power and there was a referendum.

But the party has previously indicated it would campaign for Remain in any new referendum held while the Conservatives were in power.

It is not yet clear whether any Labour government would try to reopen negotiations with the EU over a deal to leave, or proceed straight to a referendum.

The party told BBC News it would decide this when it produced its manifesto, which it will need to publish if a general election is called. A manifesto sets out what a party would do if it got into power.

Until July, Labour had resisted outright support for another referendum. Its deputy leader, Tom Watson, said “ambiguity” over the party’s Brexit policy had cost it votes at the European elections in May.

But delivering a referendum before 31 October, the date of the UK’s scheduled departure, will be all but impossible. An extension would be necessary to have a general election and then a referendum afterwards.

Mr Corbyn has said he will call the vote of no confidence at the “earliest opportunity when we can be confident of success”.

If a no-confidence vote passed, by getting a majority of MPs to support it, Labour and other opposition parties would have 14 days to form an alternative government. If successful, Boris Johnson would be expected to resign as prime minister.

Labour’s previous Brexit plan was to leave the EU but maintain a very close trading relationship, by staying in a customs union and keeping close alignment to the single market.