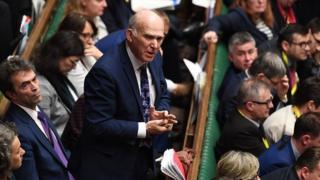 Sir Vince Cable has announced he will step down as leader of the Liberal Democrats in May, saying it has been a “privilege” to lead the party at a “crucial time”.

What now for the Lib Dems?

Sir Vince’s 22-month tenure has seen the party languish in the opinion polls and struggle to capitalise on its anti-Brexit stance.

But with the UK’s departure from the EU “postponed, and very possibly stopped”, as Sir Vince put it, retirement beckons for the party’s 75-year-old leader.

While he spends his time writing novels, having dancing lessons and seeing more of his family, the Lib Dems are beginning to think about what lies ahead.

What state is the party in?

After a period in coalition government with the Conservatives, the Liberal Democrats suffered badly in the 2015 general election, losing 49 of their 57 MPs.

They now sit alongside the Independent Group (Tig) as the joint-third largest grouping in the House of Commons, with 11 MPs.

But while the breakaway group of ex-Conservative and Labour MPs has the benefit of being a new entity attracting considerable attention, the Liberal Democrats have struggled to make headway in the opinion polls and both the Lib Dems and Tig have dismissed talk of any kind of merger.

The Lib Dems claim their membership has more than doubled since 2014, to about 99,000, but they’re attempting to broaden their appeal with a registered supporters’ scheme.

The party has also struggled to reach double figures in opinion polls even at a time when the two main parties have suffered with splits and controversies.

Who could be the next leader?

Although a leadership contest will not officially begin until after the English local elections in May, possible contenders are already emerging.

One senior party figure said “a good contest” was important to allow a candidate to emerge who could “move the party forward, lead and inspire people to join”.

Sir Vince acknowledged the Lib Dems had been punished for their time in coalition with the Conservatives, and party members will consider how closely any potential new leader would be associated with that period.

How will the contest work?