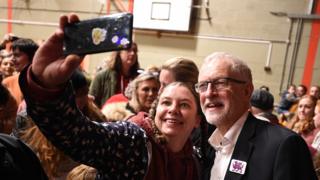 Labour must not resort to “wishy-washy centrism” after its disastrous general election showing, ex-Welsh secretary Lord Hain has said.

The party had its worst UK performance since 1935 and lost six seats in Wales, leaving it with 22 of Wales’ 40 MPs.

Lord Hain said Labour must offer “a clear alternative to the Tory project” which would be “disastrous for Wales”.

But he said the “intolerance” to voters “not necessarily of your tribe” under Jeremy Corbyn’s leadership must end.

Mr Corbyn said he did “everything he could” to get Labour into power and will not “walk away” until another leader is elected, after Boris Johnson swept back to power with a majority of 80.

Lord Hain, a cabinet minister under Tony Blair and Gordon Brown, told BBC Radio Wales’ Breakfast with Oliver Hides: “The Corbyn project has some very searching self-examination [to do] that has to be done honestly.

“But I do not think the solution is to go back to just a kind of centrism that doesn’t offer a clear alternative to the Tory project, which is a pretty right-wing project, is going to take us down a hard Brexit road, which is in my view going to be disastrous for Wales in particular.

“We’re in for a very turbulent time in British politics.”

Image copyright EPA Image caption Lord Hain: “The whole base of the Labour Party has dissolved under our feet”

The former Neath MP said Labour had to be “honesty in every respect” in examining what led to it being punished so severely at the polls.

“That neither going back to a wishy-washy centrism is what we want but also accepting that this kind of policy of an intolerance at the top towards other electors, to voters who are not necessarily of your tribe or internally in the party, who are not necessarily in your clique, that’s got to stop and there’s got to be a really honest discussion,” he said.

“And then choose a successor who I think will probably be a woman, because there are very high calibre women standing in line.”

Lord Hain said there were “deep-seated issues” Labour had not confronted.

“For example, I’ve noticed how the whole base of the Labour Party has dissolved under our feet, as it were, in old strongholds like Neath and right across the south Wales valleys.