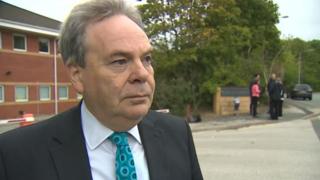 Image caption Ian Lucas will stand down at the next general election, he announced on Friday

The Labour Wrexham MP Ian Lucas has said he will not stand in the next general election.

He said on Friday evening he had informed his constituency party of the decision for “personal and family reasons”.

Mr Lucas was elected in 2001 after predecessor John Marek became an assembly member.

He held onto the Wrexham seat in 2017 with a majority of 1,832 votes – making it a key target for the Conservatives.

In a letter to Labour colleagues, Mr Lucas said the job had been a “demanding responsibility”.

“I am 60 next year. I have been an MP since I was 40. I think the time is right for me to choose to follow a different path in the years to come,” he said.

He added: “Thank you all for your support and loyalty and I will continue to serve the people of Wrexham to the best of my ability until the next election comes.”

I have informed Wrexham CLP (@WRX_Labour) tonight that, for personal and family reasons, I will not be standing for reselection and selection at the next General Election pic.twitter.com/ztAWcJ5Fvu

During the last Labour government, Mr Lucas held a junior ministerial post in the department of business, and had been an assistant whip.

He also sat in shadow opposition roles for Labour – lastly in defence until 2015.

As a pro-remain MP, Mr Lucas told BBC Wales last month that his opposition to Brexit could cost him the seat at an election.

In September, a man with a “vendetta” against the MP was jailed for 16 months for verbally abusing his wife and his public relations o