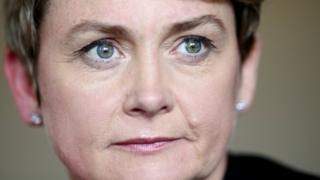 A Conservative local election candidate and activist has been jailed for nine weeks for sending threatening messages about Labour MP Yvette Cooper.

District Judge Marie Mallon, sitting at Leeds Magistrates’ Court, said it was “particularly serious” given the murder of Jo Cox in June 2016.

After sentencing, Ms Cooper said the case was “very sad” and “very grim”.

The messages were sent as Parliament was debating Brexit in April.

“She will pay,” wrote Spencer, referring to the Labour MP for Knottingley, Castleford and Pontefract, who had led a move to delay Britain’s withdrawal from the European Union.

“I’m already organising to hurt her.

In another message, which was read to court by prosecutor Susannah Proctor, Spencer said Ms Cooper was “actually working against the working classes”.

After the messages were brought to the attention of Ms Cooper’s office, police interviewed Spencer and he told them the complaint was “a political smear because of his politics and age”.

He also said he could not remember sending the messages.

His solicitor Sheik Amin told the court his client had mental health problems and had been upset about the death of his father and other issues.

A reference for Spencer from the Morley and Outwood Conservative MP Andrea Jenkyns, which was read in court, said he was “a decent and honest person whose heart was in the right place”.

But she added she did not “condone what he has written in any manner”.

After the case, Ms Jenkyns released a statement defending her decision to write the reference.

She said she had known Spencer for “a number of years”, and was concerned about his “emotional and mental well-being”.

Spencer, of Eddystone Rise, Knottingley, West Yorkshire, ran as a Conservative Party candidate for Wakefield Council for the Knottingley ward in May 2019.

Up until January, he described himself on Twitter as